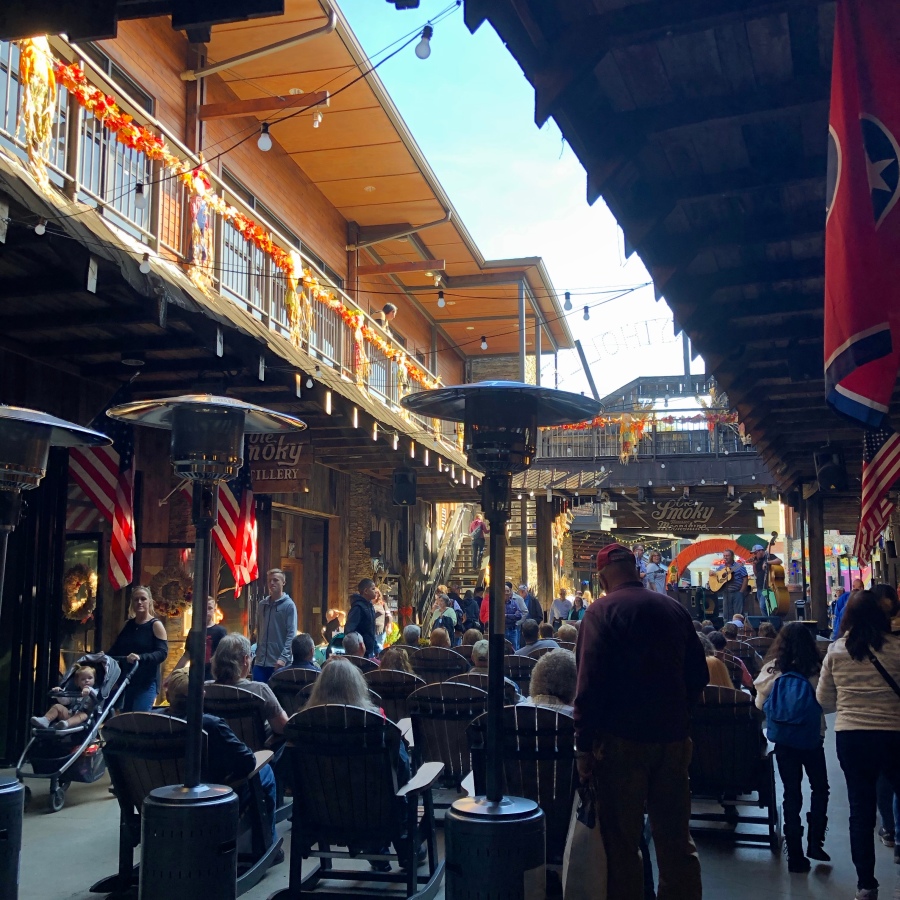 It may be just my circle of friends and family, but prior to this trip I had not heard of Gatlinburg. It’s a small town in Tennessee on the northern side of The Smoky Mountains with a population of less than 5000. My husband would send me Instagram posts of activities going on in Gatlinburg and I was immediately drawn in by the fairy lights and outdoor activities. I just didn’t think we’d be heading there anytime soon.

For my surprise anniversary trip we arrived in Gatlinburg mid afternoon. WOO! But we were hangry. More accurately, I was hangry. It seemed appropriate we would end up at a place called Dick’s Last Resort. In hindsight I should have noticed the character on my menu. For reference, there he is down below…

Tony remembered seeing a video about this years ago. Basically the premise is they don’t have to be nice to you. Far from it, they are known for being mean and not taking your shit. They get a kick out of throwing napkins and straws at you; no save the turtles here lol. It’s family style seating whether you like it or not. And you get paper hats with custom names courtesy of your waiter. Turns out a “lot lizard” is not a reptile. Google it…

Here’s two things stood out to me the most:

Overall it was fun. I wouldn’t make that the establishment I take my parents to, but I would definitely recommend people do it at least once.

After filling our bellies we explored the area by foot. There is an entire distillery called Ole Smoky Moonshine tucked away behind Dick’s last resort. The entire town was decked out with harvest decor too.

You can both see and smell the process, as well as read about moonshine’s history and origin. I’m all for a nice alcoholic beverage, but that smell was nasty BLEGH!

To make up for the smell there was a band playing live music and plenty of rocking chairs to enjoy the tunes. Inside the store I found some of the most aesthetically pleasing shelves ever!

Later on that night once the sun had gone down we were feeling especially adventurous. Tony, who is afraid of heights on most days, had the bright idea to venture into the Skylift Park. He didn’t realize you needed to ride the yellow and orange sky lift in order to get to the sky bridge. For reference I’ve added an image below that was taken the next day with daylight.

Normally I would be making fun of him because it’s not that high. But the swinging yellow death traps do not secure you into your seat. The restraint, if you could even call it that, lifts and does not lock in. Needless to say, we were both slightly freaking out. Don’t judge us.

Did I mention the Sky Bridge has glass floors too? We didn’t know until we were up there either lol. Oh, and the bridge swings in the wind too.

Once we were done exploring the bridge we found a bar inside the cafe. We had some beers and enjoyed some nice views of Gatlinburg. Well, at least I was enjoying myself until Tony reminded me we still needed to ride the death traps down to go back to the car. FML.

Obviously I’m exaggerating when I call them death traps lol. I’ve never gone skiing and didn’t know that in order to keep the flow moving the restraints didn’t lock. Don’t let my over-dramatization deter you from heading up either. It’s real nice up there. The views include the space needle and the mountain coaster. The beer is also a bonus. Sort of like a prize for conquering your fear of heights (not that I have one). And sort of like liquid courage to help you head back down.

Actually, the best gift you could have given her was a lifetime of adventures.

Monday Mornings will never be the same 🥺