This post is one of four. It’s about my sister and I setting out to see the Pacific North West. Well, as much as we could in the time we had. She had school and I had work come Monday morning BUT THE LONG WEEKEND WAS OURS TO CONQUER!!! [insert fun, evil, maybe not so evil but slightly delusional from lack of sleep laugh here]

For those of you who came here in search of information for your own trip, or simply don’t care for the somewhat mundane fluffy stuff. I’m providing you with an out. Below you will find links to all the posts directly relating to the things Diana and I did in and around the city of Seattle. If upon reading this they’re not all updated, I promise I’m working diligently to get it all on here ASAP. As always, if you have any questions, please feel free to ask 🙂

Now, where were we? Ah, yes! How were two girls who had never been to the state of Washington going to pull off covering 20 hours worth of distance and still make it back to the airport in time? (Say that out loud with one breath!)

We also knew it was important to sleep on the flight because we were going into road trip mode the minute we landed. So we took a selfie and assumed the position. I had window and was propped up by all the sweaters/scarves. And Diana was middle and leaned on my shoulder/back. And before we knew it we were at SEA-TAC.

We rented a car from E-Z and I couldn’t have been happier. FYI, you have to take a shuttle from the terminals to get to the rental counters. There are signs everywhere for the bus stop to get there.

Once at the rental are, all the other companies had long lines. However, we walked right up to the counter. After signing the contracts we took the elevator down to be greeted by two lovely women. They gave us keys and had us on our way.

Side Note: I used to work in rental many years ago. When you get a vehicle that has damage but you don’t want to risk being delayed an hour, take ALL THE PICTURES. Our car had a broken license plate and marks all over the rear side. This is more of a precautionary thing I do to avoid issues upon return.

We were so excited to be on the road! First stop: Jack in the Box. My sister and I had never had it before. Wouldn’t you know it, the cook is out and they can’t prepare anything but fries and nuggets. So, reluctantly that’s what we ate. Whatever, excitement kept us going because we couldn’t believe it. We were in SEATTLE!!!

It was also sunny and the warmth of the sun felt amazing!

That is until we got further west as we headed to Port Angeles.

During our first hours in Washington we experienced sunshine, rain, sunshine again, and then sleet. I would say that was a pretty appropriate welcoming.

We were staying at the Super 8 in Port Washington. Few things to note regarding our stay. They were very cost-effective, free breakfast started at 6am, and the receptionist that checked us in was extremely knowledgable about Olympic National Park and the surrounding areas. She gave us a bunch of maps and answered some important questions I had. The rooms may not be the newest, but we got a great deal and we really just needed a place to shower and sleep.

Like I said, we had a lot of ground to cover and very limited time. We dumped our luggage in the hotel room, changed into hiking gear, and headed over to the Safeway supermarket to grab essentials for our two days in the peninsula.

Our first stop was Lake Crescent. There is a great pull off viewpoint you can’t miss due to its massive sign. But in case you do, here are the coordinates: 48.073554, -123.773199 It’s right before sledge hammer point and 28 minutes from the Super 8. There are a few pull off points to enjoy some decent views. 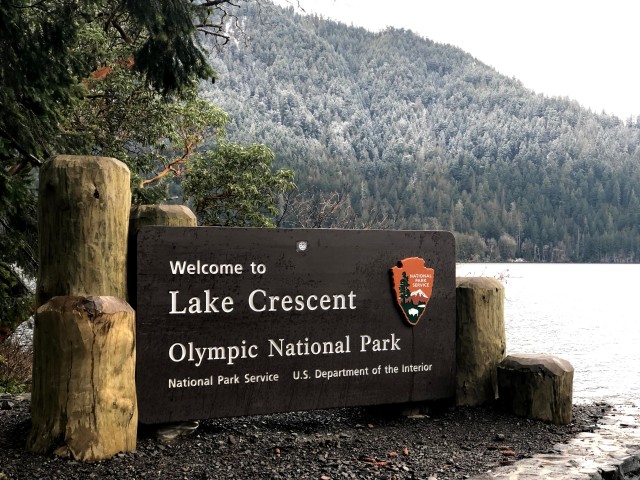 From this point it’s another 3 minutes to the Storm King Ranger station where the trails for the Lake Crescent pier, Marymere Falls, and Storm King begin. We parked in front of the sign ready to brave the cold. The station itself was closed, but the bathrooms to the left of this sign were open. 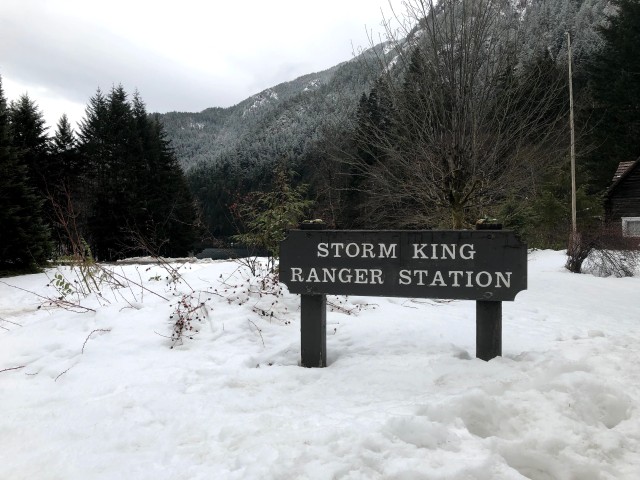 We hiked in mud, snow and ice to Marymere Falls. I have a post about it HERE. Let’s just say it was interesting to see how fast it got dark out.

Afterwards we headed to Sergio’s Hacienda where we devoured a veggie burrito and chicken en crema dishes. 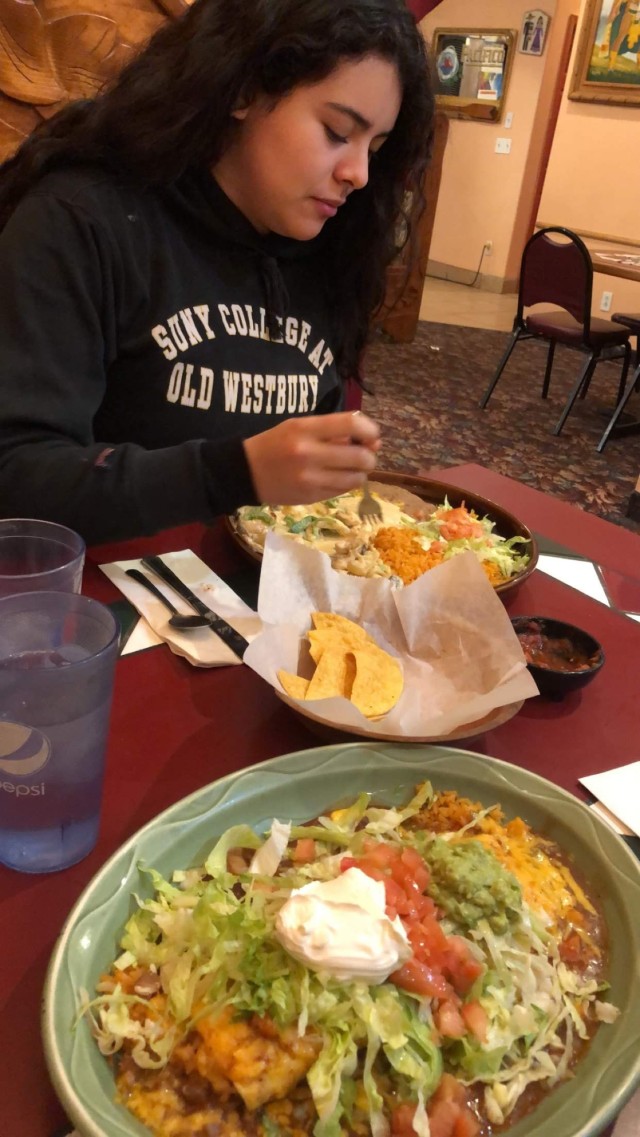 “It is easier to change a man’s religion than to change his diet.”