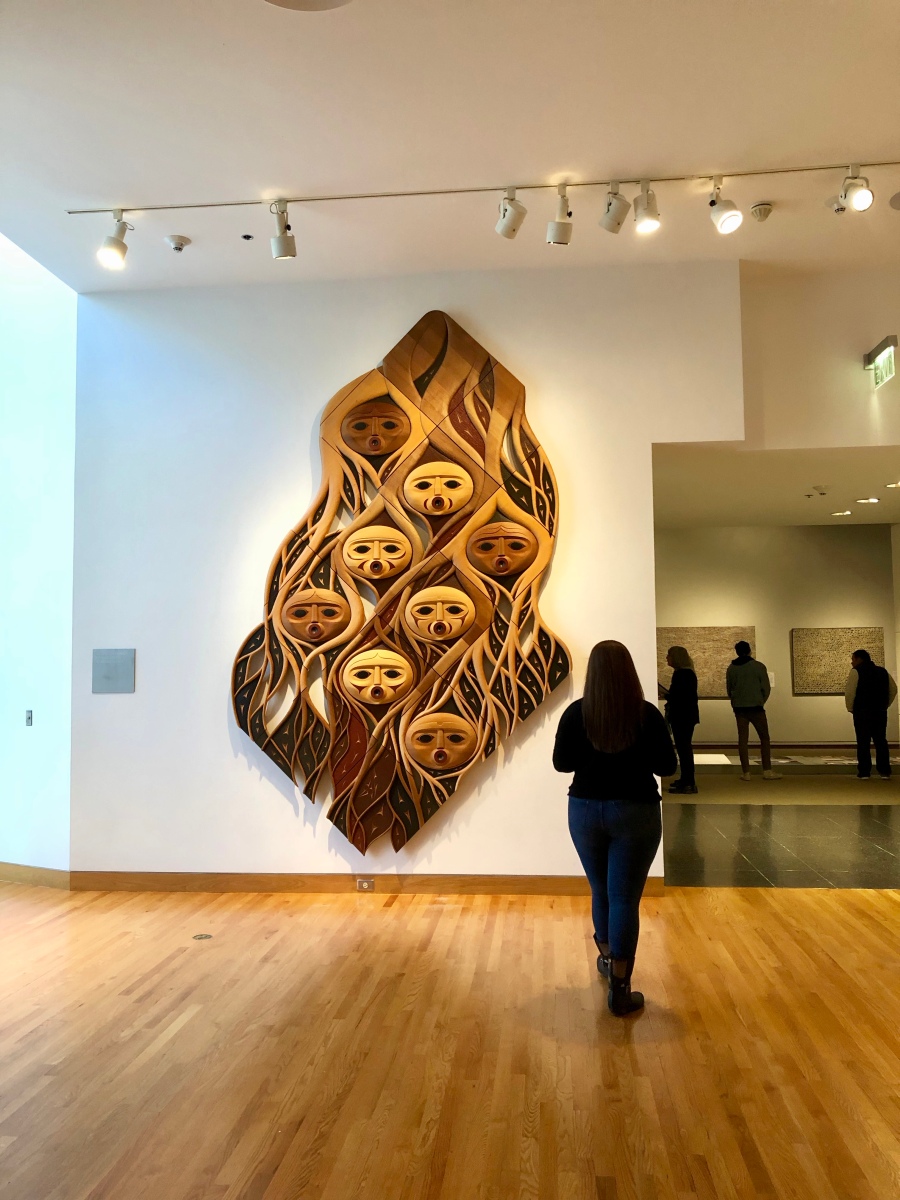 This post is three of four. It’s about my sister and I setting out to see the Pacific North West. Well, as much as we could in the time we had. She had school and I had work come Monday morning BUT THE LONG WEEKEND WAS OURS TO CONQUER!!! [insert fun, evil, maybe not so evil but slightly delusional from lack of sleep laugh here]

For those of you who came here in search of information for your own trip, or simply don’t care for the somewhat mundane fluffy stuff. I’m providing you with an out. Below you will find links to all the posts directly relating to the things Diana and I did in and around the city of Seattle. If upon reading this they’re not all updated, I promise I’m working diligently to get it all on here ASAP. As always, if you have any questions, please feel free to ask 🙂

Those were the words I said as the GPS informed me I would be getting on a Ferry. We were driving to Seattle from Port Angeles and I had pulled over to verify this info. I was freaking out because what do I do with the rental?!?!?!?! I can’t leave it and hop on a ferry!

Turns out it’s pretty normal to take the ferry from Bainbridge Island to Seattle with your car. It reduces driving time because you avoid driving through Tacoma and it gives you a chance to stretch your legs. I can’t say it wasn’t a welcomed surprised once we figured it all out.

It was only appropriate we had another awesome surprise like this. It was after all my sister’s birthday. HAPPY BIRTHDAY CAROLA! Her birthday had already brought me luck earlier that day. A certain someone was speeding and got pulled over by a state trooper. I don’t know if it was because of the out-of-state license or the fact that we weren’t actually rushing to be anywhere. I told him I honestly didn’t know I was speeding. My sister and I were just laughing it up and enjoying each other’s company. Lucky for us, it was March 9th. So we were sent on our way with a warning! Also, we were THE LAST CAR to get on the ferry. Luckily for us that meant we wouldn’t have to wait for the next one. Drive time uninterrupted. WOO! 🙂

So, the ferry. Well ok then… begin photo shoot 🙂

Never one to miss opportunities for some great pics we did just that. From different levels of the ferry and different distances from the city. We even had time to face time with our parents and tell them how exciting this trip was so far.

I should mention the weather though… It was cold and windy, don’t let those smiles fool you. Most people stayed in their cars or in the enclosed portion of the observation deck. We don’t get to do this everyday so we enjoyed every moment of it.

Soon the ferry was arriving and it was time to get back in the car.

We drove for 5 minutes after getting off the ferry to the Pike Place Market Garage. You can find their hourly rates HERE. We chose this lot because even though it isn’t the cheapest option, it’s centrally located. We walked to everything from there.

We started our Seattle sightseeing by heading straight to the Seattle Art Museum. Just a tip we learned from a local: donate your own amount instead of paying the suggested admission fee. Also, I wouldn’t pay for the extra exhibits. There isn’t a guard or attendee to check tickets at the exhibits so you are free to go where you wish.

This piece here… it spoke to me on levels I can’t even explain. I may write a post about it one day, but for now here’s a picture with its description. #RedCedar 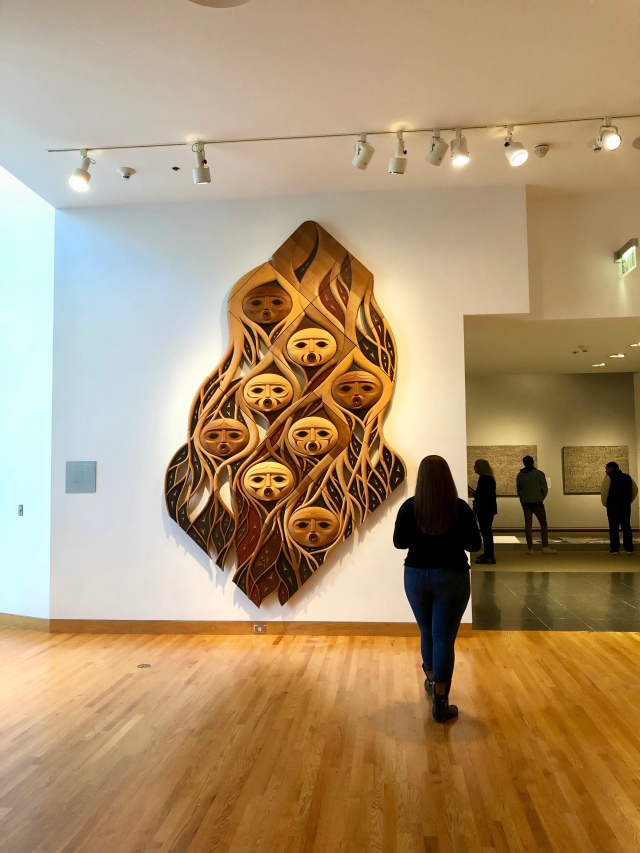 And as any self-respecting coffee drinker I had to see what the fuss was about at the first Starbucks. Full disclaimer, this in fact is not the original location of the very first Starbucks. It’s the place the first store moved to in 1977. We read an article on The Guardian and it provided some informative history about the place.

Either way, it was cool to see the original mermaid logo with her bare breast and a sign erected over 40 years ago. The line was crazy long and as much as I love coffee, I wasn’t interested in waiting for one at the moment.

So the birthday girl opted for coffee flavored ice cream instead 🙂 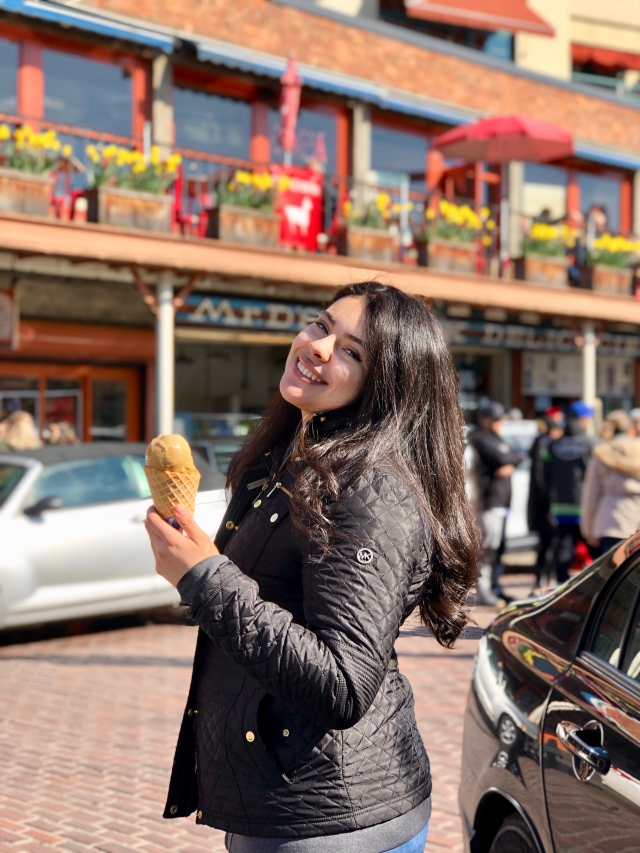 It was delicious. Even more so because we did not wait on-line for it. Just a minute walk down the road was the famous public market sign and clock. It’s a timing game trying to get a picture there with everyone standing around for their own perfect picture.

Now… the fish throwing. It was hilarious watching this guy trying to entertain a group of tourist. He played a couple of pranks (which I won’t ruin by sharing here) and cracked a ton of jokes. Here’s the catch, get it? Catch! I crack myself up! Sorry, my husband says my jokes are terrible lol.

Anyways, the catch is that in order to watch someone throw and catch the fish, someone has to actually purchase something. So be patient, a local will show up and buy something eventually.

Now. The fish market didn’t bother me. Not even the smells. Probably because it was chilly out and not the middle of summer. But this right here- I could smell the weird icky sugar-ish odor as we walked downstairs to the gum wall. Gross. If this is your kind of thing, I totally respect that. Just not my cup of tea. I even totally understand how it started, and you can read more about that HERE. I just don’t get how it became a tourist spot. I found a truly satisfying video of the wall being cleaned off HERE. After we took our pictures, we ticked it off the list.

Here is something to note about walking around the market. There are stairs and steep streets everywhere. Bring your walking shoes.

Once we’d had our fill of walking the market and its surrounding areas we had lunch. Biscuits as sandwiches? YES PLEASE! 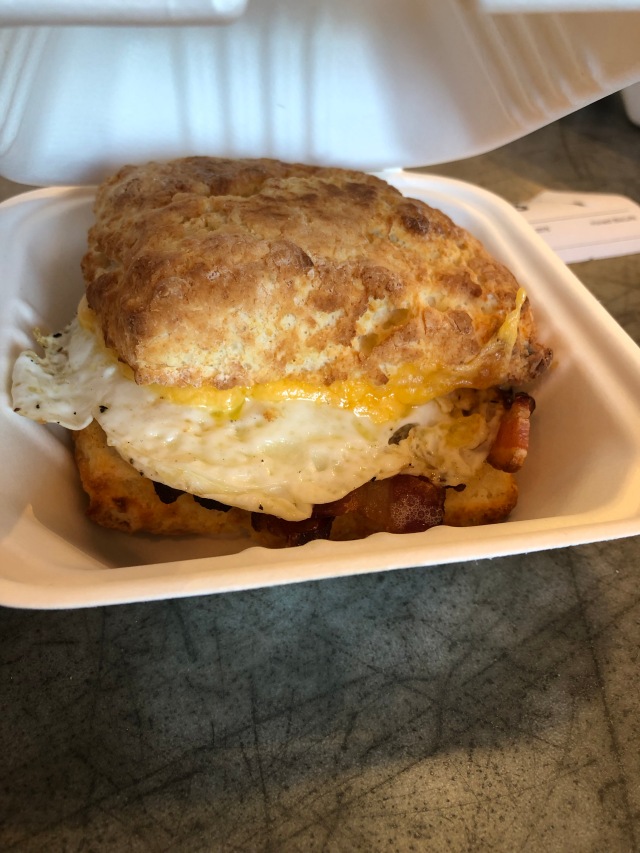 We grabbed our car and headed to the AirBnb. The AirBnb, located in the Queen Anne area, was perfect. She even had a hard cider waiting in the fridge for us. We were able to relax for a bit and rest our feet. The plan was to head over to Kerry park in an uber around 5:30pm. Just in time for sunset. It set us back $7. Not having to drink and drive? Priceless.

Now THAT is a view. We were prepared (unlike many others there) and had a large plastic bag to sit on. It rains a lot in seattle and you can’t be too prepared for sitting on a wet ground. We also brought a blanket and set the time-lapse on the GoPro. Aside from the first night in Washington, we were treated to some great sunsets that weekend. 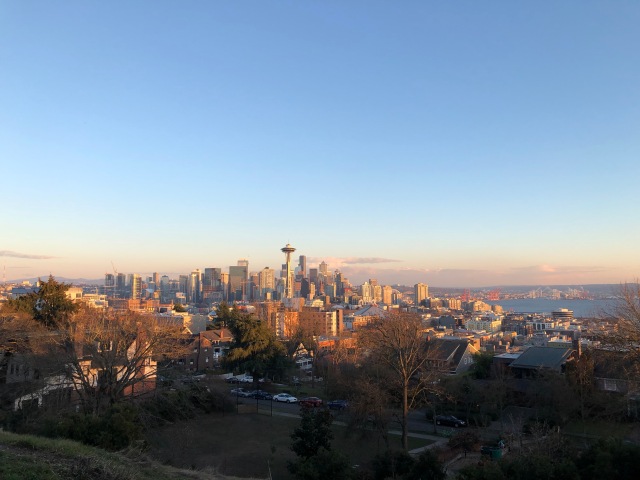 After sunset we took an uber to Kinokuniya. My sister watches anime and I was in dire need of some market shopping. We purchased tea sets, looked through tons of merchandise and even bought some chopsticks to replace my broken ones.

It was Diana’s birthday and she was preparing for a feast. We went to a place my friends and I had spoken about in 2018. It was this magnificent video that we all passed around via Facebook messenger. I figured since my sister loves seafood and we would be in town, it would be a great place to spend her 19th birthday. They even give you bibs and gloves. That should have been a sign of things to come.

Downside? We waited for an hour to be seated. But we completely forgot that once this bag showed up. We were so hungry! It was full of crab legs, crawfish, and all sorts of delicious sea creatures. This is my sister preparing to devour her dinner. 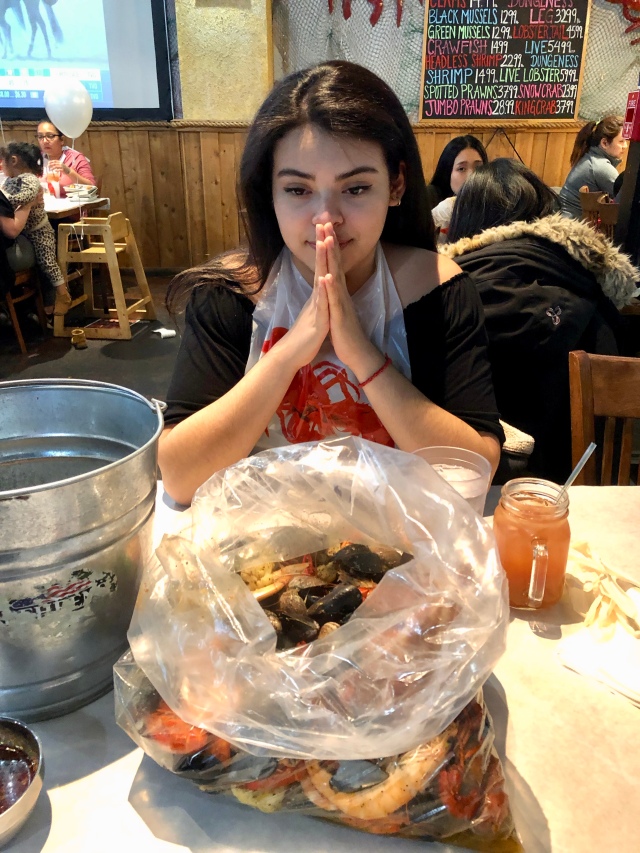 And devour we did. That bag was E M P T Y

They were nice enough to gift my sister her favorite ice cream (green tea) for free. The drinks also got a lot stronger. I’m telling you, March 9th is a lucky day!

We closed that place down as some of the last customers there. They even do this cool thing where if you spend more than $100 you could spin for a free appetizer. We spun, we won, we conquered! I’m hoping to go back to Seattle soon enough to be able to use that voucher for some more good eats.

“Uber, take me back to Queen Anne please…”